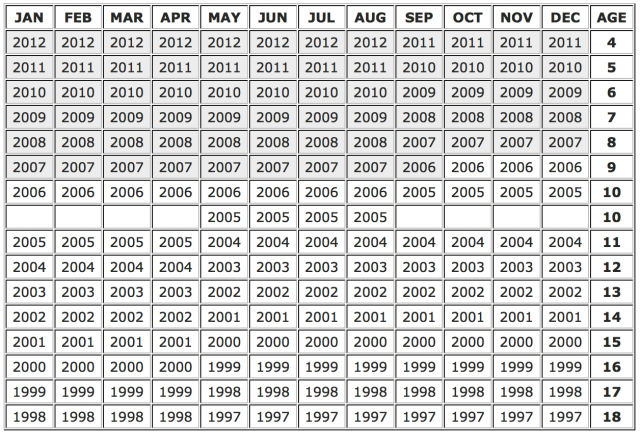 In 2011, Little League conducted very detailed participation research. As a result of that research, we learned that parents, players, and volunteers wanted to see Little League become, as a whole, a younger program, and give children an easier way to play Little League with their classmates. Since the research concluded, Little League revamped its Tee Ball program, established a Coach Pitch Program, and changed its residency requirements to allow children to play in the league where their school is located. Adjusting the Age Determination Date will help us achieve the goal of making Little League younger. And, making the date August 31, the same that many schools in many states use for student registration, allows Little Leaguers to play with their classmates.

For players born on or after September 1, 2005: The new age determination date will be effective immediately, starting with the 2016 season. This was the implementation used for the 2015 season, with players turning 4 to 9 years old during the 2015 calendar year to use the December 31 age determination date. That implementation remains in place, except instead of using December 31, you will use August 31.

What’s the impact of this new change to my child?

If your child was born between January 1 and April 30, there has been no impact in any of the Age Determination Date changes.

If your child was born between May 1 and August 31, there is no change from the previous age change and implementation.

If your child was born between September 1 and December 31, he or she essentially reverts back to where they were from a League Age standpoint prior to the 2015 season, and, like those born between January 1 and April 30, there is no impact on them.

“After announcing the new age determination date for our baseball divisions in 2014, we have received important feedback from many volunteers and parents,” said Stephen D. Keener, Little League President and CEO. “We continue to work with all our volunteers and our International Board of Directors toward the goal of making the Little League Baseball Division truly a 12 and under program, while also mitigating the impact to those currently participating in the Little League program.”

Note: This age chart is for BASEBALL DIVISIONS ONLY, and only for 2016.